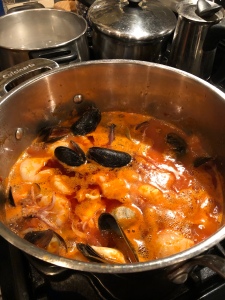 Yeah, that’s right. I cheat my way through an Italian American staple of Christmas Eve celebration.

There’s no reason to feel guilty about it, however.

Your traditional Feast of the Seven Fishes – which is reported to have started in southern Italy – feels like just a little too much work, being seven separate fish dishes. And in some families, the fish count can go as high as twelve (in homage to the 12 apostles).

I like to think of myself as an ambitious worker, especially in the kitchen. With some of the dishes my grandmother used to make – meatballs, fresh pasta, rice balls, chicken cutlets being examples – I think the long, slow, hard work route is the most satisfying. I try not to take shortcuts, and actually enjoy the labor involved.

My grandmother always featured a fish dish in the house on Christmas Eve – but I don’t recall her doing seven of them, as she had little time for such endeavors. Aside from cooking for her family, she was always buried in food prep during the day for the family restaurant that she helped establish.

On Christmas Eve, she had already worked plenty hard. I doubt she had any interest in the intense work of creating such a meal after a long day running her business.

Her meal that she liked to make was a simple one: a piece of freshly fried haddock, or one of my favorites, a linguine tossed with a sauce of tuna and tomatoes. A dish like that is a memorable one for me, bringing childhood flooding back all over again.

That’s the idea of trying to recreate tradition, right? To release the memories from their time capsule, to bring forth an even more enhanced holiday experience.

As I’ve said before, I don’t like to live in the past but I do like to make the occasional visit.

To make our tradition here easier and a little less laborious, my wife and I will condense the formidable preparation of seven fishes down into three straightforward dishes:

If you’re counting, the number of fishes once the stew is done, comes together as seven.

My wife and I like to serve this dish simply, as well – with just a crusty bread on the side, to soak up all the goodness from the sauce and fish liquid that shouldn’t be wasted.

We do have company for this meal, and the preference for a couple of family members is to have the fish and broth ladled over pasta. It’s an option that’s delicious, and one I can recommend, as well.

Interested in a recipe? Try this one, from the celebrity chef (and our favorite television personality) Lidia Bastianich. Her version can be found here:

Like this article? Please share on your favorite social media channel. Or better yet… read some more, with the related content below. To be notified of future posts, please enter your email in the space provided. And feel free to leave a comment below!