“Politics is an easy place to go to avoid dealing with your real problems. In fact, many of the people who spend their time worrying about partisan politics do so as a way to avoid addressing what really needs to change in their life. The changes you need to make are not going to be addressed by any politician or government agency. While elections are important, they aren’t nearly as important as what you can do for yourself.” – Anthony Iannarino

As we steamroll into these final months of an election season – with heated debates that promise interest and entertainment – this is not going to be another internet political rant.

I don’t have an agenda against one candidate, or for another. That’s not my deal.

As a small town citizen, who would I be to bash anyone that is running a campaign to acquire the world’s most demanding job?

I do, however, have a small problem with the slogan “Make America Great Again.”

Albeit, the slogan sells. Look at the campaign rallies – the citizens have come droves to bathe in the rhetoric.

With smart phone at the ready, clutching a Starbucks or upgraded handbag in their one hand, waving their rally sign with the other.

I look at our country of today and think to myself, “are we really in that much trouble? Has America lost her greatness?” 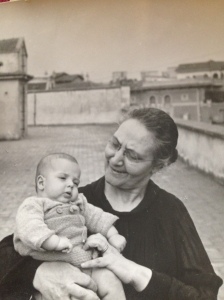 My great grandmother, pictured here, could possibly have told you about the greatness of America, if she could speak any English. Arriving here in 1929, she stepped off the boat onto Ellis Island just in time for the greatest stock market crash our economy has faced.

She left the comfort and familiarity of her small town in Sicily, and if my facts serve me correctly, the first home in that town with indoor plumbing and running water. Truly the lap of luxury.

I would not blame her if she thought she left her homeland to travel great distances to a country with big problems.

Luckily, she had a rock steady family unit around her. Up against the odds and mighty struggles, that family turned out successful business owners, physicians, teachers, cooks, artists, and all around American success stories.

The secret to that success?  Embracing simplicity, values, and a never say die work ethic.

New York Times columnist Frank Bruni wrote a wonderful article about our 2016 Olympic athletes – but as I was reading his words, I felt he was talking about my immigrant family more than anything:

They invested hour upon hour, day after day. They sacrificed idle time and other pursuits. They honed a confidence that eludes most of us and summoned a poise that we can only imagine. They took risks, big ones.

And they pressed on, because there was this thing that they wanted so very, very badly and the only way to know if they could get it was to put everything on the line.

And herein lies the issue with modern America – everything is expected, and little is earned.

Should we be shocked most people don’t think America is great? How could you, when the perception is – the wolf is at the door, at all times?

We all need to leave our warm, comfy cocoons and come to one realization – the resident of the Oval Office doesn’t matter. In the end, you are responsible for your life.

Statistics bear out that we live in one of the safest, and most prosperous, times in our history. We have running water. Indoor plumbing. Plenty of food. Perhaps, too much food. Modern conveniences that have no purpose other than to make our unfit bodies more comfortable, within houses and property so opulent that the rest of the world may not be able to fathom.

And we need to “Make America Great Again?” Give me a break.

My Italians came here with little hope other than to live as poor immigrants. They made themselves great. We can all do the same.

Embrace your inner peasant, your inner Spartan. Start earning what you think you deserve. Make yourself a little uncomfortable in the process, on purpose, instead of searching for the convenient answer.

As Mr. Bruni wrote – sacrifice your idle time. Instead of resentment, embrace the work. Cultivate a freakish devotion. Put it all on the line.

That’s what your ancestors did, and what we can do. That’s America, and her greatness.

2 thoughts on ““Make America Great Again?” – You Can’t Be Serious”