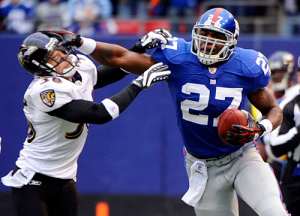 When you become a new, fresh faced father pacing around the floor in a hospital room, holding your newborn baby in your arms, you have no idea what will happen next.

You have no idea how fast time will pass you by. It feels as if the years have the span of months. It all just happens way too fast.

This has happened to me twice. Twice holding newborns. Twice the feeling of time speeding by, like that rocket ship we all daydreamed about when we were kids.

I watched my daughter run around in our back yard, a little girl. Swinging on her swing set. Now I watch her get behind the wheel of a car, to take a driving lesson, another step into that now brief journey into adult life.

Although sometimes I can feel like a kid, the hard truth is I’m not anymore. Soon my children won’t be kids anymore.

This discovery was made again on the afternoon of Super Bowl Sunday. My son and I decided to celebrate the grand tradition of American football that day with a game of “two hand touch” out in the back yard.

Joey had just turned 12, but he’s still my “little guy”, slight of stature. In a wrestling match or a light sabre fight, because of my size, I’m usually the victor of any match physically.

Our game started innocently enough, with some kicks and passes, catches and dropped balls. Just like the real thing. Then he decided he wanted to run for touchdowns. He tried his best on the first few attempts, but with his short strides, I caught him pretty quickly from behind.

On one particular run, I set myself in front of him to stop him once again. No problem, especially since he was running and giggling at the same time.

Then it happened. He stopped giggling (did he put on his mean face?), tucked the ball under his arm, ran full throttle towards me and stiff armed me…his right hand straight into my chin. In a state of shock, I fell flat on my ass as he ran past, scoring a touchdown in our makeshift “end zone”.

I thought I tasted blood, and sure enough, I touched my hand to my mouth and it came away with a small, red streak. After he dumped me to the ground with a text book stiff arm, I came up bleeding!

My son’s a well mannered boy. He apologized to me for making me bleed, and we kept playing a while longer, continuing to have fun. But the results of our playtime speak for themselves.

Growing up cannot be denied, and kids can’t be contained in the backyards of their childhood forever. They break free. Breaking the tackles, stiff arming the obstacles of life, and running for glory.